The team had a great time competing in So Cal in the 14u Platinum division.  The competition was fierce and the team did well by having an opportunity to win every game they competed in.

​AZ Hotshots 16u - Captain replenishes their 2019/2020 roster with a talented group players.

The team traveled to Palmdale, CA for their final event of the season.  They had victories over SoCal Synergy, Firecrackers IV Steiner, SoCal Outlaws and Bownet Peek Menefee.  The team finished the year strong with a 9th place finish and earned a berth to future USA Preps National events.  Hit this link for more information:  USA Preps Summer Nationals 2018 Results

The team completed another successful season finishing with a national ranking of 39th.  This ranking is the result of strong performances at the TCS Fireworks and TC / Elite Nationals.   Hit this link for more information on National Rankings. 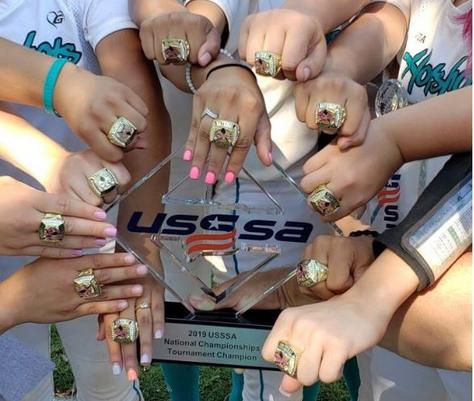 The team traveled to Austin, TX to compete against some of the top teams in the nation.  The team finished with a 4-4 record, placed 15th and had some impressive victories including a tight 2-0 win over Texas Dirt Divas.

AZ Hotshots - Captain moves up to 16u.  Adds key players for upcoming season.

On August 5th the team held a try-out and had a great turn out.  After evaluating over 40 players we added Hannah DiFabio, Bailee Cordova, Vanessa Hunt, Taylor Meyers,  Morgan Greene, Lauren Klimkowski and Keeley Yeager to our 2017-2018 roster.  After a follow up try-out the team added Jade Ng and Alexia Boring to the roster.  We are excited to have these new young ladies on the team.

The team was in the supplemental power pool and faced some great competition.  The team logged victories against Team CT, Chicago Cheetahs, LA Blazers Elite, NC Challengers, EC Bullets and a very exciting comeback victory over Explosion.  The team finished with a record of 7-3 for the week and placed 17th in this prestigious event.  Hit this link for more information:  TCS Fireworks 2018 Results

The team expected strong competition and this event did not disappoint.  We faced some of the top teams in the country including Select Fast Pitch, Tampa Mustangs, West Bay Warriors, Glory Adkins, Aces Ashley, So Cal Breakers, OC Tigers and Vision.  With some timely victories the team finished a respectable 17th overall.  Hit this link for results.  2019 TCS Fireworks Power Pool results

AZ Hotshots - Captain brings home the championship at the 2017 USSSA The Patriot 16u.

The team played very well together during their first tournament of the year.  Team defense was excellent as the players showed lots of consistency, versatility & speed.  Pitchers (Morgan Greene, Vanessa Hunt & Jade Ng) all contributed on the mound.  Team offense generated lots of runs and base running was outstanding.  Morgan Greene (Pitcher) came in as a reliever during the championship game and shut down Firecrackers - Munoz as the team eventually grabbed the lead for good.

The team pulled off a perfect 8-0 record for the week outscoring their opponents 40 - 10.  Aubrey Chavez hit .525 for the week earning her the team tournament Offensive MVP and Angelica Tello had the hot hand on the mound earning her the team tournament Defensive MVP.  The team played very well collectively with each member making a contribution.  Hit this link for results.  2019 USSSA West Coast Nationals results

The team held try outs during the early part of August and we are please to announce the following roster additions:  Aubrey Chavez - 3B / SS, Amyah Boostedt - SS / 2nd / P, Brooklyn Flores - C / IF, Jadyn Gilley - IF, ​Kaytlin Leyvas - OF / C, Angelina Sanchez - OF, Angelica Tello - Pitcher / 1B.

The team is the only 16 team in AZ to be invited to play in the 2020 TCS Fireworks Power Pool tournament this summer!  This will provide our players with the opportunity to play against the best competition in the nation and play on the best fields so they can be seen by college coaches.

The team traveled to Atlanta, Georgia to face some of the top teams in the nation.  The team logged victories against Lady Lighting Gold Elite, So Cal 3D, Atlanta Vipers and Vision Gold.  The team battled but came up short against the likes of other nationally ranked teams such as Premier Fast Pitch, Tampa Mustangs, Firecrackers Sewell and So Cal Choppers Ziese.  The team finished 4-4 overall for the week which earned them a 12th place finish.  Hit this link for more information:   TC/USA Elite Nationals 2018 Results